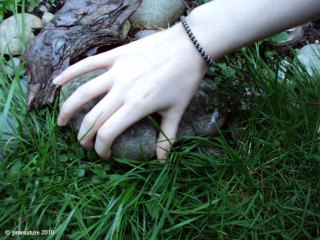 (This is a follow-up to last week’s post on forgiveness.)

Sometimes when you lift the rocks lying with all their weight upon the dampened earth of your soul, unwanted creatures are found living there.  The light of day makes them scurry but just knowing they were there makes you want to jump out of your skin. Emotions which slither, scuttle when disturbed. The fresh air disturbs the moist, dank place which had been left alone for a rather long while. I almost always wait for all those nasty things to evacuate the premises and then I work to put the rock back just as it was, so I can walk away.

The moment after I decided I wanted to take a step on the path of forgiveness, murderous thoughts sprang like up ninjas. Murderous ninjas. Seriously, here I am getting all holy and godly and wanting to forgive this jackass and then boom, I want him dead.

It’s only a little bit funny because it’s so normal. Of course no one talks about it. They are too busy talking on facebook about how they are praying for someone or quoting the most awesomest preacher ever.

Remember that scene in the first Lord of the Rings movie, when they are in the house of Elrond and Bilbo sees the Ring hanging around Frodo’s neck? I’m not sure if it’s in the book cause I haven’t read the book in a couple of years – the copy I have is huge and unwieldy. The pictures are awesome though. Anyway, Bilbo’s face contorts into some demonic form and he reaches wildly toward Frodo’s neck and the Ring. Just moments before he spoke to his nephew with tenderness and affection. And then this fierce evil takes over.

I just wish I could blame it all on some damned (literally) magical ring.

It’s this heart however, I’m stuck with. A heart, at once hoping for traction in forgiving someone and also looking to grease it’s own wheels with resentment. This is the truth – some of the time I want to forgive and move on but there’s a hell of a lot of time (literally) when I just want to put the rock back exactly as it was. I’ll replay all the old movies for catharsis, pausing for the bits where I am really, really wronged. You know how sometimes when you pick the rock up the ground moves and needs to be pushed against the edges so that cold hunk of matter will just stay put.

Maybe this is step number two.

First, you have to decide to forgive, knowing you are woefully incapable of doing it. So you ask for God’s help. He knows a little about forgiveness and so can be wildly helpful. But then after taking that step you realize you still have all this hate and a heart to match. So maybe you gotta just reckon with this dark reality as the next step – the evil that kept you from forgiving doesn’t just disappear when you step on the path of forgiving. Otherwise you start talking like Pollyanna and living out the Christian version of the Hallmark channel…which by the way looks an awful lot like the video section of the Christian bookstore. You know, framed needlepoint verses in pixels. And that would just be a step backwards.