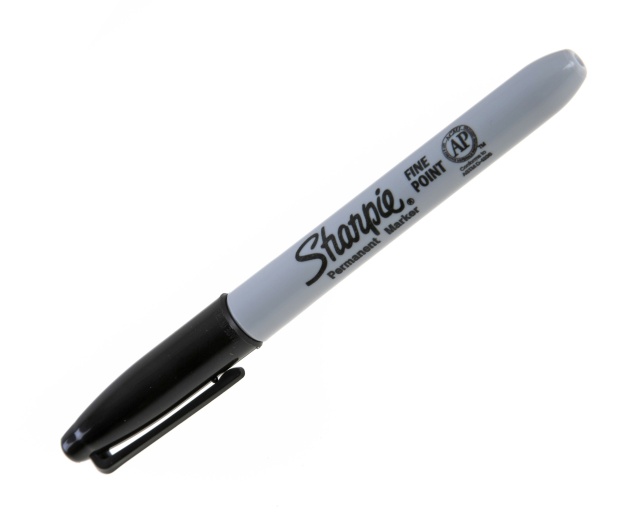 I had to borrow a Sharpie at work. But not for a document or anything having to do with the dignity of work. A few months ago the pocket of my suit coat got caught on the corner of a desk and ripped a little. My wife stitched it up but there is still a little bit of white internal material showing. Contrasted against even a fading blue, people notice enough to comment. So I borrowed the sharpie as a fig leaf.

This 12 year old suit, bought by my parents a few days before I graduated from Seminary is not my only one. I have another but the pants are too tight in the waist and a moth got hold of them anyway.

The Sharpie was borrowed just 10 minutes after clocking in at 8:09. If I had clocked in at 8:07, it would have counted for 8:00, but as it is, I am clocking in at 8:15 unless I send an email to my boss explaining to him I was here earlier but I was not able to clock in then.

There are countless ways to deprive a man of his dignity.

“What did you need the sharpie for?”

“I needed to cover something up.”

Two days ago my wife and I decided she needed to quit working. A couple years ago, we were desperate for more income. She started cleaning houses which sounds more dignified than calling her a maid. The money she made was a life-changer. We went from not even making it paycheck to paycheck to actually going on a short family vacation. But her shoulder hurts and it’s become chronic pain.

The whole morning my age has become a constant specter at my elbow every moment. The lost income. I’m 43. Clocking in later. I’m 43. The Sharpie. 43.

Behind all of this is the stark reality of my own work and how little it pays and how much I don’t like my job and the smallness. I’ve gotten pretty good at what I do. But the guy next to me is better. And he is new. And he is 21 years old. And English is not his first language.

It just dawned on me he is closer to my daughter’s age than I am to his.

When I wrote The God of the Mundane I wrote it because of what I saw in the lives of others. The original blog posts were written during a time when if anything, my star was rising. My writing was garnering more and more attention. But the God I was writing about was not humored. He wanted to make sure I believed what I was asking so many others to believe. Whether mercilessly or mercifully, I cannot give an easy answer, but I have been forced to answer the questions I asked others to consider. Forced to consider my own counsel.

One of the lessons I’ve learned is there are two kinds of mundane. There is mundane compared to vocational ministry. A successful business owner needs to believe his work is inherently spiritual. He may be tempted to believe his work is nothing compared to the work of a pastor. But there is another kind of mundane. The successful business owner will at least have the consolation of “success” and the rightful spoils thereof. But what about the little guy in the dead-end job?

This is a whole different ballgame. Back when I was doing youth ministry, we always had less money than our friends and the people I worked with. But I was doing ministry. There is a certain dignity in not having a lot of money in ministry. You (and others) can justify and spiritualize the lack in the name of Jesus. But not having a lot of money in the business world feels more like leprosy.

I know what you’re thinking. This guy is talking about dignity and money a lot. And you’re right. But that is why the question of whether there is a God of the mundane matters. Does my work matter in the absence of those things? Because I ask that very question all the time. If I have dignity through working in vocational ministry or chartable work, then money is not quite as important. And if I at least have enough money to get by, even though I don’t have dignity, we can go on a nice vacation and I can forget about my work for a few days.

Right now one of you is trying to figure out how to get money to me. Please don’t, see dignity above. Seriously, please don’t. That is not what this is about. This is my answer as to whether or not I believe my work matters before God on a day when I need a Sharpie for a threadbare suit. Because I’m not the only one asking the question. Someone somewhere is asking the question in a harder situation than I am.

Banking is an industry famous for cold hard numbers and bottom lines. An unhealthy amount of people start their conversations with me in anger or sadness. The angry people are hard. Sometimes I can’t even guess as to why they are so mad. But there have been enough times where I’ve been able to peel back the layers and get to know them and where they hurt. And it’s usually that spot on their soul hurting, where the pressures of life, and sometimes death, have made them angry.

The sad ones are countless. A couple of weeks ago I talked with a 23 year old mother of a 2 year old who had been a widow for a week. And then there’s the man whose wife drained the bank account and left with another.  And the executor of an estate watching his once peaceful family fight like Nazis over his parent’s estate. Or a woman gathered into loneliness, on social security wondering how she will get to the next month’s check.  A mother worried that her disabled daughter with a constant smile will make me uncomfortable. The alien among us, who speaks and understands just enough English.

Whether anger or sadness, the issues are usually money and dignity. They all come with their own personal sharpie to cover the vulnerable places. The places they are ashamed of. The tender places.

On the same day I used the Sharpie and clocked in at 8:08, I had my first book event related to The God of the Mundane. I was taken out for a nice dinner beforehand. I signed books while others sipped wine. And I had to talk about how even in my own work I have to push back against the Fall. It was a surreal experience, the event juxtaposed to the Sharpie.

One of the questions I keep asking is “Why?” Why all this?

Until I had to explain what the “pushing back against the Fall” looked like for me in front of a couple dozen other people, it didn’t dawn on me that I needed to feel the sharpie in my own hand for the sake of all those on the other side of desk. The grace of the gospel of Jesus dying naked and uncovered to cover my real shame is what I need when lacking money and dignity.

The angry and sad ones? Them too.

10 thoughts on “The Sharpie As A Fig Leaf”