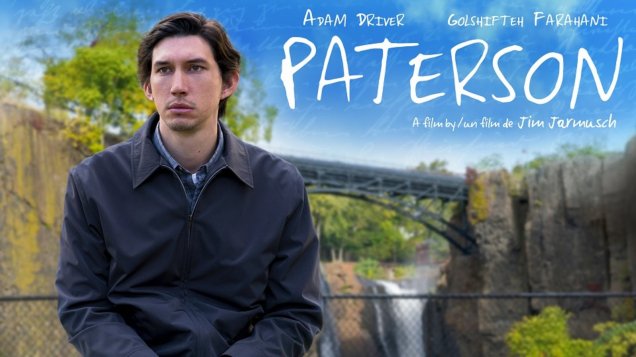 I’m not a big fan of movies. Rarely do they do what I want them to do. They seem to usually either distract or propagandize. And neither of those options open up the heavens. But every now and then I find one.

Not long ago someone told they didn’t like the movie, Paterson, because it was slow and didn’t go anywhere. That person is exactly right. And that is exactly why it is one of my favorite movies. I want to move slow and I don’t want to go anywhere…on a a number of levels.

Paterson is about a bus driver poet (played by Adam Driver, no really), named Paterson who lives in Paterson, New Jersey. His favorite poet is William Carlos Williams, who is from Paterson, New Jersey. The movie is full of Paterson’s poetry (actually the poetry of Ron Padgett) voiced-over while he is driving and walking through his day. Paterson owns no cell phone and there appears to be no TV in the house. His day is fairly predictable except for the whims and artistic pursuits of his wife.

But actually the movie is about something else. William Carlos Williams’ most famous piece of work is a lengthy work called “Paterson.” And in that work, he says something that poets and critics have been debating for a long time.

“No Ideas but in things”

There is a scene when Paterson is walking his dog and he hears a guy (Method Man from Wu-Tang Clan) in a laundromat working on a rap. In that rap he quotes the above line from WCW.

The great American poet, Donald Hall, friend to WCW, helped me see what this line is all about. Williams wanted to write without a message. No sermon. No lesson to be learned. No big ideas. He simply wanted his reader to see what is there. See it differently. See it for what it is. See people for who they are.

Even the movie Paterson is meant to do that. There is nothing exceptional in the lives of the characters (unless Paterson, the bus-driving poet’s seeing is exceptional). You are meant to simply appreciate them as they are without any need to be a big idea or a message.

Of course, the irony is the movie does have an important idea. Apart from our ideas and our opinions…and even our convictions, there is value in this world in which God has made. Our ideas and thoughts or feelings about a tree blooming in early Spring do not add or subtract from the intrinsic value of said tree. It is a thing wholly outside of us and it’s value and beauty is not beholden to usefulness. And if that is true of trees it is true of the most ordinary people.

If you were to say the above title to this,
my poem,
you would,
I think,
be quoting me,
yes.
But I’m quoting Augustine,
who was,
understandably,
quoting Plato,
who was,
of course,
quoting Socrates.
And it turns out,
he was,
in fact,
quoting Euripedes,
the playwright-poet,
whose tragedies I bought this morning,
at the library bookstore along with a $2 puzzle for my wife.

2 thoughts on “Everyday Poems #9, ““Who Knows If Being Alive is Dying, And Dying Is Being Alive””