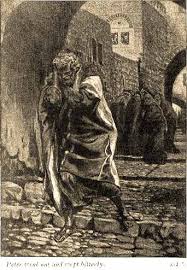 When your reading C.S. Lewis and Eugene Peterson, certain ideas and paradigms, once unfamiliar, begin to shape the way you think and feel about…well, everything. One, shared between them is beginning to take root. What will grow is yet to be determined.

Imagination is the kind of thing we want to cultivate in children but find very little active need for as an adult. For children, it is needed. For adults and those preparing to join their ranks, it is an abstraction for those given to distraction. But in the minds of Lewis and Peterson – where I live these days – imagination is part of the Christian life.

The difficulty is having an imagination of the present. The tendency is to look at people and evaluate them on what you know, what you see and hear from them. And of them. Unlike my children who look at the copse on the edge of property and see a vast forest and can imagine stormtroopers and ‘bad guys’ needing to be fought with plastic guns and light sabers, I only deal with what is seen. The difference being I should know better.

My children imagine a fiction. I should be able to imagine a present reality. A reality of God’s unseen work by the Spirit. And the principalities we ignore. Emotions and facts, dreams and fears should be taken for granted, even though we have no knowledge of them. And the contours of such a life – the life we all lead – should give rise to a pastoral imagination. You could also call it a biblical imagination as Peterson does. One formed by Romans 3 and 7, the polarities expressed in the Psalms and the complex picture of sadness of Ecclesiastes. Did not the gruesomeness of the cross demand an imagination of victory? Simul iustus et peccator demands an imagination.

No one is off the hook in this. But for pastors it must be especially incumbent. It is far too easy to look at a congregation and be discouraged. Every pastor has this temptation. But biblical imaginations formed by grace demand we look at what we cannot see…imaginatively taking in all the information knowing the God of grace is working in places we cannot always diagnose.